According to the Cuban news agency, the training of Cuban specialists in new technology is conducted with the participation of Italian specialists and is held at the Clinica Central Cira Garcia in Havana.
The project is headed by Gabriele Antonini, urologist and a member of Sapienza University in Rome.

“The goal of the project is to implement a program to train other doctors in the country so that they can perform this type of surgery,” Antonini told the publication.

According to the urologist, this system of prosthetics was developed in the early 1940s and has improved over many years. The model, which is currently commissioned in Cuba, is the latest generation and involves the use of an antibiotic, which reduces the risk of postoperative infections. 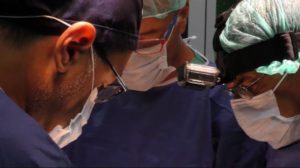 The patients, who come in for this treatment are those who had colorectal cancer or prostate cancer.

There are also those who had problems with the vascular system or some kind of deformity of the penis, as well as patients with diabetes mellitus, or men with bad habits, such as smoking.

“Many men suffer from erectile dysfunction, but they cannot solve the problem, because they do not know anything about prosthetics,” Antonini said.

This initiative, implemented in Cuba, is aimed at creating an international reference center and is aimed at promoting new urological surgical treatment throughout Latin America.